In honor of my 21st  birthday I’m dedicating this post to two vastly different but wonderfully related things: classic literature and classic cocktails.

It’s no secret that 20th century writers of the World War II era were about as dedicated to their drinking as they were to their novels.  Cigarettes and alcohol fueled expatriates like Hemingway and Stein as they scribbled down the beginnings of what would later become American classics.

According to David A. Embury in his 1948 book, The Fine Art of Mixing Drinks, (a classic in its own right) there are six basic cocktails: Martini, Manhattan, Old-Fashioned, Daiquiri, Side Car, and Jack Rose.

The famous author is known for his minimalist style, short sentences, and of course his Daiquiri drinking. Hemingway might have sipped this drink from his apartment while looking over the Paris streets. Here’s how you make it:

Shake with ice and strain into a chilled cocktail glass.

Another Hemingway-related favorite is the Jack Rose cocktail, famous from its appearance in The Sun Also Rises.  Jake, the narrator, drinks a Jack Rose in a Paris hotel bar while awaiting the arrival of Lady Brett Ashley.

Shake all ingredients with ice, strain into a cocktail glass, and serve. 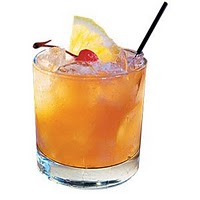 Faulkner and Hemingway looked up to Anderson as a literary role model; they also took up his fondness for cocktails. Anderson called the Old Fashioned his “personal poison,” which turned out to be tragically true. He died after swallowing a toothpick at a cocktail party, eventually causing a fatal infection in his stomach.

Combine the sugar cube, bitters, and 1 tsp. water in an old-fashioned glass. Muddle well, add blended whiskey, and stir. Add a twist of lemon peel and ice cubes. Add slices of orange and lemon and top with the cherry. Serve with a swizzle stick.

“I believe that on the first night I went to Gatsby’s house I was one of the few guests who had actually been invited. People were not invited– they went there.”

F. Scott Fitzgerald had a talent for displaying the lives of the fabulously rich, and the hidden moral decay behind them. In The Great Gatsby, parties held every weekend on Long Island offer a glimpse into that fantastic, unattainable lifestyle. The blurring nature of drunkenness fits right in to Fitzgerald’s themes of disillusionment and an out-of-reach American Dream. 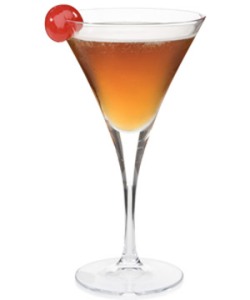 Pour the whiskey, vermouth, liqueur, and bitters into a mixing glass. Add large cold ice cubes and stir for 40 revolutions. Strain into a chilled cocktail glass. Garnish with the lemon twist. Drink the Manhattan post haste. 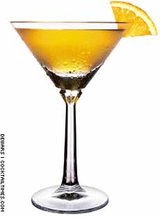 Gatsby’s partygoers might have also enjoyed a citrusy Sidecar, one of the most popular cocktails to emerge from the Prohibition era.

Pour the ingredients into a cocktail shaker with ice cubes. Shake well. Strain into a chilled cocktail glass.

There’s a certain sophistication about a martini that can’t be found in any other cocktail. Martinis have always been a drink of class. But the classic martini is easy to make and equally easy to ruin. It’s also easy to drink too many, as Dorothy Parker admits…

“I love to drink Martinis, two at the very most, three I’m under the table, four I’m under my host.”

Stir ingredients briskly with ice, then strain into a chilled glass. Twist a small strip of lemon peel over the drink. 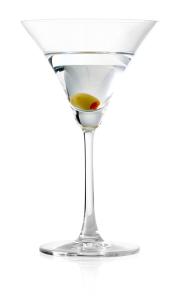