I’m spending the summer working for the Toledo Blade in Toledo, Ohio as a reporting intern. Friends and family keep asking me, “From London to Toledo–why?” and I can honestly say that although Toledo’s no London, no New York, I like it here. I get to write every day and work with amazing people. I’m getting solid reporting experience, and am finding out a lot about the city while doing it.

It was Memorial Day Weekend when my parents helped me move in to my new apartment (which is HUGE, by  the way). When we drove up to the parking lot in our Target-stuffed Suburban, dusk just starting to fall, I had mixed feelings about the whole thing. The building didn’t look all that nice from the outside. And there was absolutely nothing going on, absolutely no one on the streets, which was kind of eerie. The city is somewhat of a ghost town– when business people leave at 6 p.m., the downtown empties out. After work hours, it becomes nearly impossible to find a place to eat, except for a handful of scattered restaurants and bars. Sundays are just a lost cause.

There’s not much socially going on in Toledo, but there is always news.

Toledo is a depressed city. Once bustling and prosperous, the decline of the automotive industry and the white flight epidemic left it deflated. But everywhere, still, you see remnants of the past– beautiful Victorian houses from the 1900s, a grand theater, even hot dog joints that were opened in the 20s and haven’t changed much since. It’s interesting seeing the juxtaposition of majestic architecture and spreading urban decay, and I’m intrigued by this idea of what Toledo used to be.

I’ve been scrolling through the Toledo Library‘s archives of old photos just to get a sense of it. Pictured above is a street right in the downtown, Madison Avenue. It’s hard to imagine so many people once crowded these streets, because today they’re almost always empty.

I’ll be posting more “then and now” pictures later. 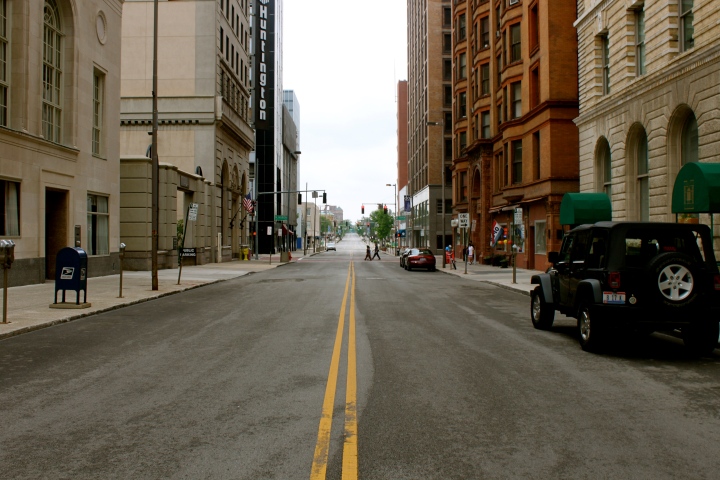 This is the same street pictured above, Madison Avenue, today.

3 thoughts on “From London to Toledo”