It was about 5pm one of the first sunny Saturdays of spring. I stood outside Brooklyn Bridge Park waiting for an Uber over to a party in Williamsburg after a long, mimosa-filled picnic brunch.

“Miss Sara! Hello! How are you? It’s such a beautiful day, isn’t it?” Shamraiz, my driver, exclaimed as I slid into the back seat. “Days like this, everyone’s mood changes, everyone walks with their heads held high!”

In just a few minutes I learned Shamraiz has five kids, one named Sara like me but she spells it with an “h”.  He loves his wife more than anything – she’s the reason he left Pakistan for America. I learned he’d driven a yellow cab for 14 years and switched over to Uber last year. He likes the newfound flexibility.

“If you work hard, and stay positive, good things will come to you,” Shamraiz said as we snaked our way through Brooklyn. “It’s nice to be important, but it’s more important to be nice.”

“Absolutely,” I agreed. “You should really write a book with all these sayings.”

“Either write something worth reading or do something worth writing,” he promptly spouted, proud of himself for recalling such a relevant quote. “That one’s Benjamin Franklin.”

I laughed. I realized in New York, I don’t blink an eye at extreme negativity. But extreme positivity is intriguing, makes me question whether the person has a motive or simply looks at the world in a different way. With Shamraiz, it was clearly the latter. But why in New York is positivity suspicious, while negativity’s the norm?

“Well, here you are,” Shamraiz said when we reached my destination. I thanked him and got out, but moments later he rolled down the window.

“Learn from the past, live for today, dream for tomorrow!” he shouted over the bar music, before speeding away.

A little girl holds her mother’s hand, jogging every few steps to keep up. She looks up at the tall buildings and says, “Mom, how long does it take to make a city?” 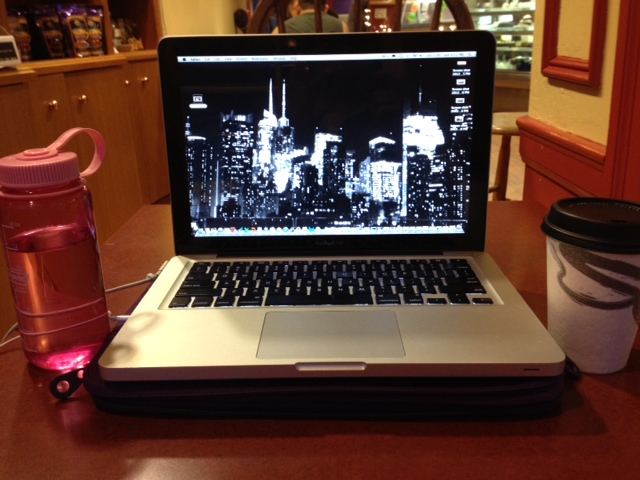 Laptop. Coffee. Water. All a writer needs for a long day of creative composition, right?

Sitting in my favorite Cool Beans today, I thought about the most important things for my productivity as a writer.  I’ve been writing creatively, almost innately, since I was very young, but I realized I needed these “tools” when I began thinking of writing as a craft or a profession.

Essential tools in my writer’s toolbox (besides coffee, water and laptop)

1. Books: It doesn’t matter whether they’re digital or print. Reading is absolutely vital for good writing. A writer who doesn’t read is like a musician who doesn’t practice or an athlete who doesn’t train.  There is almost no chance for growth.

2. Internet: Maybe there was a day, way back in 1990, when access to the Internet wasn’t important for the modern writer. Nowadays, I get significant inspiration from flipping through random writing blogs, The New Yorker fiction archives, magazines and online newspapers. That being said, the Internet can sometimes be detrimental to the writing process.  Author Zadie Smith suggests working on a computer that’s disconnected to the Internet. I don’t totally agree, but when it’s time to get down to the really hard stuff, the Internet can be counterproductive.

3. Coffee shops: For me, coffee shops make the perfect environment for writing. I need the stimulation of conversation and buzzing espresso machines. I also need a place that’s quiet enough for me to isolate myself with headphones.

4. Notepad. Again, whether it’s an iPhone or a Moleskin, that doesn’t matter. What does matter is that I always something on hand to jot down ideas or paragraphs when the muse strikes.

5. Thesaurus. Let’s face it: no writer always has the perfect word to describe their perfect image. The thesaurus is a fabulous writer’s tool for constructing with words the image already constructed in your mind.

7. Music. The way runners have pump-up playlists, most writers use a playlist of songs to help them transition into a writing mood. Sometimes it’s very difficult to go from the mindset of rushed every day life to the very patient, isolated and introverted mindset of writing.  Music is also one of the best tools for climbing out of the trenches of writer’s block.

–> What are your essential writing tools?

“Writing has laws of perspective, of light and shade just as painting does, or music. If you are born knowing them, fine. If not, learn them.  Then rearrange the rules to suit yourself.” ~ Truman Capote

“The role of a writer is not to say what we all can say, but what we are unable to say.”   ~ Anais Nin

“When writing a novel a writer should create living people; people not characters. A character is a caricature.” ~ Ernest Hemingway

“Words – so innocent and powerless as they are, as standing in a dictionary, how potent for good and evil they become in the hands of one who knows how to combine them.” ~Nathaniel Hawthorne