*Author’s note: this article was first published in Notre Dame Magazine at magazine.nd.edu.

I had never seen this much flannel in one place at Notre Dame. The room was filled with men and women in plaid shirts, and standing at the microphone was a poetry student from Notre Dame’s creative writing M.F.A. program, reading selections from her work.

A few girls “whoop whoop” and others in the audience clapped, smiling at the student’s cleverness. This group thrived on wit, intellect and the beauty of language.

The décor was an eclectic mix of things that shouldn’t go together but somehow did. Sunflowers sprang from the walls beside oddly shaped mirrors. Shelves held books and random knick-knacks. A wall was painted in red and yellow stripes, and a dusty emerald lamp hung in one corner. None of it made logical design sense, but that was the whole idea of Lula’s—letting loose, being creative and taking risks.

Mostly M.F.A. students filled the room that night, but scattered throughout were undergrads and professors. In the middle of the readings, two huge football players walked in, dressed head-to-toe in Notre Dame gear. They were out of their element, and intentionally so. There was just something wonderful about that.

The idea for Lula’s was born 16 years earlier when Egan, a public accountant in Chicago, talked over dinner one night with a friend and Notre Dame alum about opening a café near campus. “There was nothing like Lula’s in South Bend,” Egan recalled. “I felt pretty confident in the idea.”

“I did the benchmarking at every café in Chicago practically, to just kind of figure out ideas, and figure out as much financial data as I could from the owners who would be forthcoming with it,” he said.

The next step was writing a business plan and executing it.

“We wanted to be close to campus, and this was a good crossroads area, with high traffic,” Egan said of the 1631 Edison Plaza location, at the Edison/23 intersection near The Linebacker. “I didn’t leave my job in Chicago until we had a location that made sense.”

From the very beginning, Lula’s was meant to be more than just a café — inspiring the sharing of ideas and life stories. And Lula’s was always intended as a bridge between South Bend and the surrounding campus communities, including Notre Dame, Indiana University South Bend (IUSB) and Bethel College.

But after 16 years it became apparent that Lula’s time — at least its time on Edison Road — was limited. On October 5, 2010, Egan spoke to an entrepreneurship class at Notre Dame. The very next day, he was surprised with a notice that his lease would not be renewed.

After months of searching for a new location, Egan let go of the dream and took a job with Anthony Travel. Egan said one of the blessings of going through this change was hearing what Lula’s had meant to so many different people.

“It’s kind of like getting to hear your own eulogy when you’re alive,” he said then. “That’s a powerful affirmation that Lula’s has mattered to a lot of people. Lula’s has meaning outside of just a restaurant or coffee shop. There’s something deeper here.”

Over the years, Lula’s was called “the community living room,” “the gateway to South Bend,” and “the place in Michiana where people come to try to save the world.” Lula’s embraced open-mindedness, encouraging its customers to sit, talk and stay awhile. Students perched at corner tables with laptops, books lined shelves like a library, and cards and board games invited customers to play over coffee or after meals.

“Somebody said, ‘That’s one great thing about Lula’s: you can be next to a nuclear physicist, two high school kids on a date, and two grandmas playing Scrabble,” Egan recalled.

Egan attributed Lula’s success to its customers and staff, the good food and drink, the community and cultural events it hosted, and its general “vibe.” He said customers who recently moved to South Bend were told, “the first place you need to go is Lula’s. That’s where you need to start connecting to people.”

When I arrived on campus in the fall of 2008, I struggled to find a place that felt just “right.” As a quiet freshman uprooted from my New York City suburb, I needed more than Notre Dame football and tight-knit dorm life to feel at home. I often complained to my family that I hadn’t found a community of writers on campus. In fact, I hadn’t found any arts community at all.

One day I heard about a poetry reading at Lula’s Café, which was close enough to campus to walk. I fell in love at first sight. The relaxed atmosphere, friendly staff and delicious food welcomed me right away. Lula’s became a refuge when campus was overwhelming or when I just needed to think.

And Lula’s had been that safe haven, that escape, that home away from home for many.

Matt Storin, a former Boston Globe editor who worked and taught at Notre Dame, said Lula’s helped compensate for South Bend’s inadequacies as a college town. “I was originally attracted to Lula’s because it reminded me of what a college-town coffee house or restaurant should look like,” he said. “Being from the East Coast, I felt that it had a kind of Cambridge-like feel.”

Egan said closing time was bittersweet, but he felt an outpouring of support as Lula’s history at Edison Plaza came to an end.

“The last day was a tremendous day,” he said. “Both Tuesday and Wednesday were two of the best days we ever had. I gathered the staff at about nine, and in true Lula’s fashion there were customers and friends of staff just hanging around. We all went around and talked about what Lula’s means to us and the community.”

Lula’s final day of operation was Wednesday, November 24, 2010. It closed for good on Thanksgiving Day. Lula’s staff spent the next few days taking the restaurant apart, and by November 30, all that was left at 1631 Edison was an 8×11 inch sign on the door.

Another café followed but didn’t stay long, and the space once filled with Lula’s is still vacant.

The South Bend/Michiana area may not be a musician’s haven, but local guitarists Doug Rice and Anibal Fausto say the music community is small but present.

And lately, thanks to Quincy’s Cafe as a new venue, it has been on the rise.

Check out my podcast on Quincy’s and the local music scene:

Walk into Quincy’s Café on any given afternoon and the first thing you’ll notice is the people.

Students clad in oversized headphones, hidden behind their laptops and towers of textbooks. Professors holding an orange coffee mug in one hand and a newspaper in the other. A poet scribbling down thoughts in his Moleskin.

Ismail Egilmez, owner of the café, says Quincy’s has something for everyone.

“I have 90-year-old women … playing cards games down to students studying, to locals who’ve been in town forever to artists to musicians sitting in the corner,” he said. “It’s what we are, the environment that I’ve set out … if you build it, they’ll come.”

Located on the corner of Edison Road and Route 23, Egilmez credits Quincy’s success over the last year in part to its central location.

“I’m at a good crossroads,” he said. “We’re next to the campus, obviously, which we totally love, we’re next to downtown, also next to Granger, which is very popular, and everybody moves through here.” 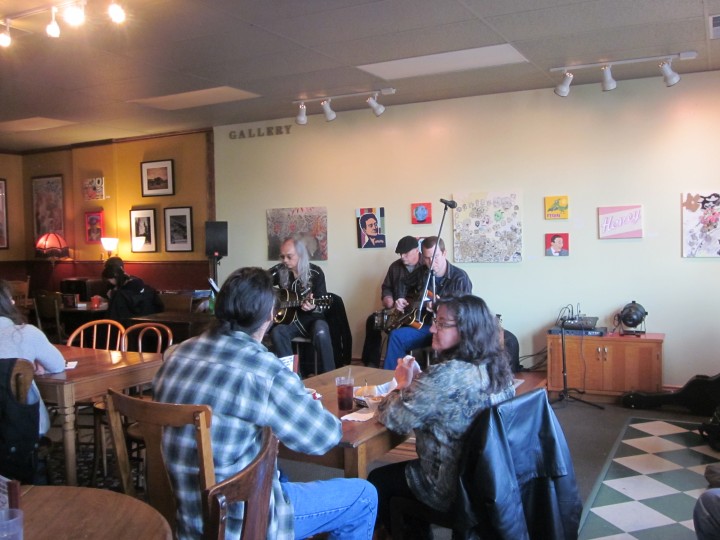 Egilmez opened Quincy’s Café one year ago with his father, Philip Egilmez, a Notre Dame alum. Ismail Egilmez had previously owned an art gallery in Chicago, which he was forced to close when the economy spiraled downward.

Opening his own café, he said, had always been a goal.

Now, the timing was right.

“It was harder and harder to find anything to really depend on … so the best answer to that was just to work for yourself,” he said. “So we came together, brought our heads together on it, and this is what came out of that.”

The quirky ambience of Quincy’s helps distinguish it from what Egilmez calls “sterile” coffee shops, chain stores like Starbucks and Seattle’s Best that have spread across the country since the early 1990s.

He said Quincy’s is an entirely different kind of venture.

“Just because the coffee associates us two doesn’t mean the whole idea of the business is [the same,]” he said. “This is more ‘take a break.’”

With its wooden tables, mismatched chairs and abstract artwork lining an entire wall, the atmosphere of Quincy’s is a major draw for creative types who find the South Bend area lacking in similar venues.

“It does build community really well, because people talk to each other and connections happen, it’s just great for the artists to be able to do that,” he said. “That way [I can] support doing the art, without completely depending on it, and still give back in that way.”

All of the artwork displayed is by local or regional artists. Egilmez also invites local musicians to play on a small wooden stage in the back of the café.

When it comes to food, Quincy’s also goes for local flavor.

“I think the signature thing is the ingredient,” Egilmez said. “I mean every restaurant is going to have a turkey sandwich, I mean we can’t patent that … it’s how you do it.”

All of the food is locally or regionally made, he said, and none of the ingredients are “skimped on.”

The coffee served at Quincy’s — on the pricier side at about two to five dollars a cup — is high quality and regionally sourced. 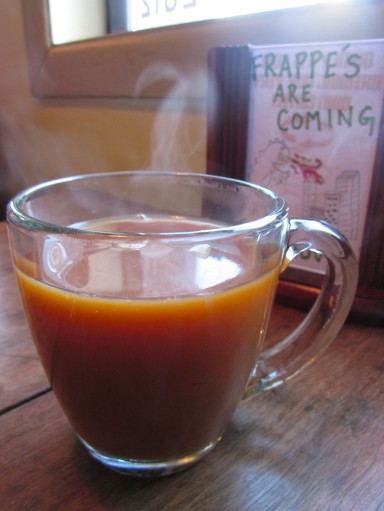 “We do Intelligentsia coffee because they’re a smaller business. I [found out] about them when I went to Chicago, basically I tasted that and I said I won’t go to any of the ‘other’ places,” he said. “It really is night and day.”

But he said the timeline for possible expansion “kind of dictates itself.”

“We want to see if the cup keeps overflowing to see if that’s needed and so right now we’re at just about the right capacity with our shows and everything, so [eventually] expanding the venue so we can offer more, a little bigger of a stage,” he said.

Egilmez said he does not want to be the kind of owner that “sets and forgets,” failing to keep up with increased demand or customers’ needs.

“You have to keep moving with it a little bit, and change, but still keep the very main core,” he said. “I’m never going to lose what I’m about. Just [add] to it a little bit.”